Please sign up for our forum, and enjoy our society.

And visit the Fan Submissions section under our general category!

You are not connected. Please login or register

» What are ya watching?

Well, I don't know what to say except that this is me, I'm a relative newcomer to the anime community as a whole, though I have watched both subbed and dubbed anime since the late 80's, most notably the series 'The Mysterious Cities Of Gold', which I never knew was anime lol.

I serve now as something of an anime collector rather than a mass-watcher, and to date I have accumulated over 50 individual videotapes, 30 or so original DVD's, 15 volumes of collected manga, 73 chapter style manga comics and I have nearly 2TB of anime stored locally and over 1000 DVD's burned and stored. The majority of my anime is used for sharing in the case of uncirculated or hard to find series, to allow as much opportunity for people to view these shows as possible.

Please observe the rules of the forum and do not ask me to provide download links, btw. Most of you here can find things on your own, anyway. If you need help locating a stream source for a hard to find series, feel free to ask me via email and I'll try to help you.

As far as what I've watched, the list is somewhat muddled by the fact that I frequently see only the first 1-3 episodes of any series I collect, but a partial list of what I actually HAVE can be viewed on AniDB.


Other than that my hobbies are reading, writing, drawing and obviously, anime. I've recently had the opportunity to meet and interact with several outstanding anime reviewers, the first of which is our esteemed Admin Henshin Ikeda. He and others have encouraged me to begin my own reviews, but I have yet to actually commit to the effort.

I'm something of a ranter, a sometime bigmouth
(as evidenced by my long as heck post) and an all around enthusiast of the anime/manga community, so go on and strike up a conversation if you don't mind having your virtual ear talked off.

I only bite during the full moon, so you should be safe 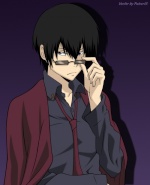 Why, thank you. Hopefully I can contribute something useful while I'm here.

LimpBiskit wrote:Why, thank you. Hopefully I can contribute something useful while I'm here.

Looking forward to that as well..

I'm definitely open to suggestions, so hopefully folks will help me out there.

LimpBiskit wrote:I'm definitely open to suggestions, so hopefully folks will help me out there.

Yeah, I just noticed that! >///<
But I appreciate the free advertising.
Since I'm somewhat busy just now, I think I'll mostly concentrate on movies, OVA's and shorts for the time being. I suppose I should also make a rec request post in the general anime thread to get ideas on what to watch..
Henshin Ikeda